Can you think of a time when you wish things had turned out differently? Did you wish you could have told yourself, the you from a week or a month before, to change some key decision or path? Would you like to be able to go back in time and change how it all unfolded?

I’d like to talk about something called “survivorship bias”; this is the general misconception that we should be looking to success stories to craft our own paths, rather than analysing mistakes. A good article can be found here, which I’d like to quote:

“I have to chuckle whenever I read yet another description of American frontier log cabins as having been well crafted or sturdily or beautifully built. The much more likely truth is that 99% of frontier log cabins were horribly built—it’s just that all of those fell down. The few that have survived intact were the ones that were well made. That doesn’t mean all of them were.” – Mike Johnston at The Online Photographer

How does this apply to magick? Survivorship bias can contribute to the swelling of our Egos in an unproductive way, if we are constantly thinking about our successes rather than our failures. Yes, we have struggled through a lot to achieve what we have, those of us who have made it for more than a few years and avoided mania or psychosis, but on a quantum level there must be many more versions of ourselves who never made it, and sank back into the quantum foam of Cerridwen’s Cauldron.

Once we consider those poor lost quantum clones, we can see that there must have been an advantage in the case of the iteration our consciousness resides in. At what point did that consciousness take the correct path from the split? Was it luck? Did we perhaps listen to the calling back from a failed future self, warning of the dangers inherent of the other choice?

I believe this is a sound enough hypothesis on which to form praxis for changing the past. We cannot amend anything we currently believe to have happened in the past, but we can send a feedback signal; not just for our failures, but for our successes, and so we must seek to leave continual memoranda and push them into a temporal bottle, and throw these into our timeline, heading back towards a point of flux, a point of Gnosis.

At the same time, this will only work if we are willing and ready to accept such memos from the future. I will give an example:

This is for any size of group, and requires one member to perform the role of Magician, whose actions are as directed. Others take part where the instruction is “Let all…”

All participants forcefully and joyously speak the quotations from Liber AL.

Standing in a circle around the Magician,

-Do what thou wilt shall be the whole of the Law.

-Every man and every woman is a star!

Draw the Thumb down to Muladhara, crying HADIT!

-There is no Law beyond Do what thou wilt!

Touch the centre of the forehead, mouth & larynx, crying AIWAZ!

Draw the thumb from right to left across nostrils.

-Thou hast no right but to do thy will!

Draw thumb from left to right across sternum.

-Love one another with burning hearts!

Draw the thumb from right to left across hips.

-Love is the Law, love under will!

-The word of the Law is Thelema!

Let all strike the battery 3-5-3, crying

Everyone should take time to absorb the energy created, and go on to further work if appropriate. 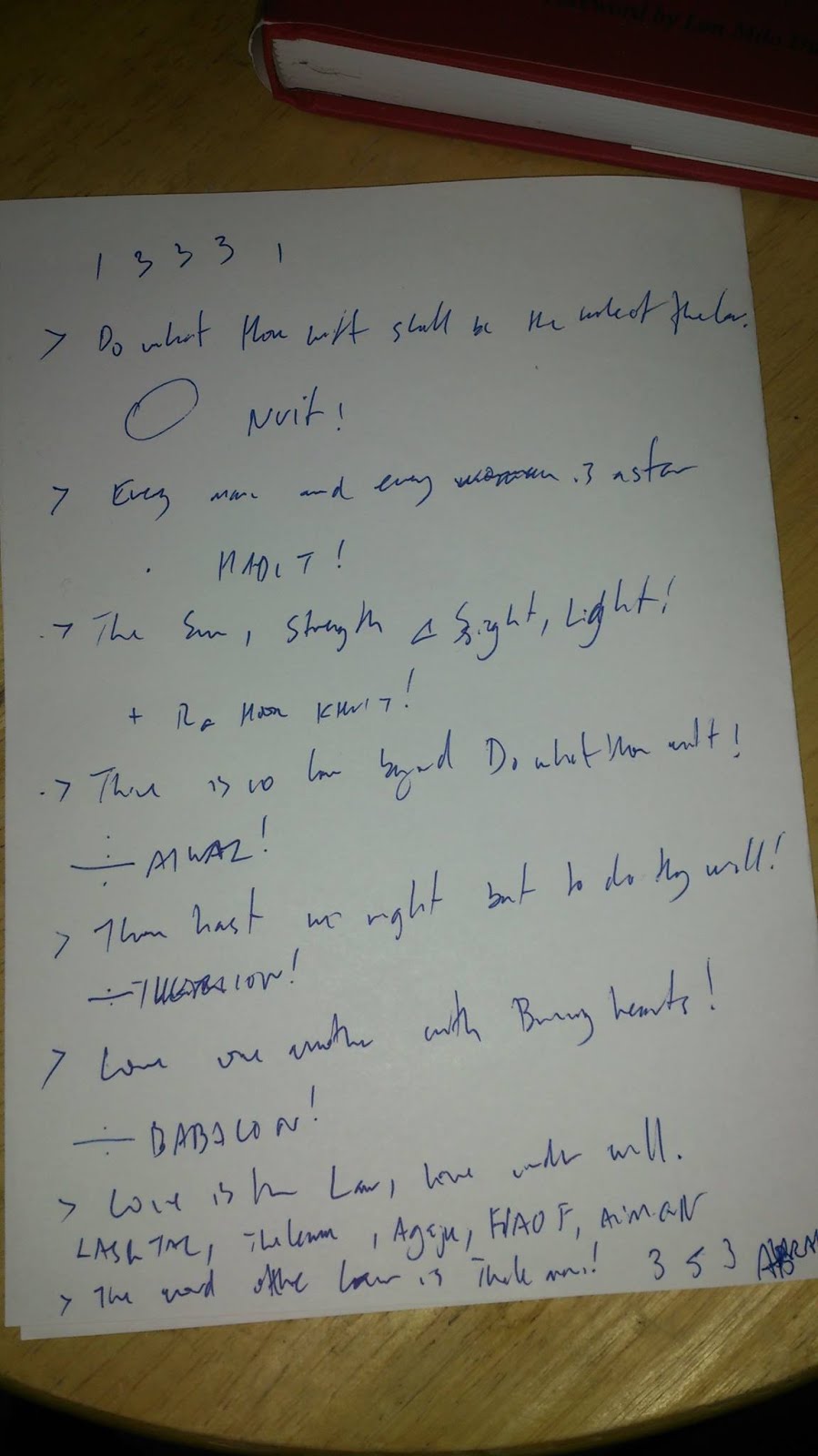 This is the result of a dream I had on the 15th of May this year, 2013 e.v. I saw myself at a conference, perhaps an OTO Assembly of the Brethren, presenting a talk which included an amended version of the Hierophantic Cross from Liber V vel Reguli. The entire room stood up with me, and we all performed this “Thelemic Affirmation”. Afterwards, I spoke to a couple of close friends, one of whom I knew would not be at the event scheduled for this year, and then woke up.

My initial thoughts were “well, that was a good ritual, where did I read that?” until I realised that I had never read it, and it had not been written down before. Obviously, I needed to write it! I jumped out of bed at half five in the morning, scribbled down (as you can see) what I could remember, and spent the day fretting about the lines as I knew one was incorrect. I talked to a couple of Brethren, one who reminded me that submissions for this year’s Assembly of the Brethren were still open, and then the friend from my dream announced that actually, they would be attending after a long absence from the Order, and giving a presentation no less.

I will now be performing this ritual as part of my presentation on August 3rd, 11 weeks later (a magical number, of course), during which some huge changes have occurred in my life. When I come to it, I shall be sure to mentally “record” the last portion, and the aftermath, and send it back to my former self from May.

In all of this, there remains a paradox: Where does the initial idea of the ritual come from, if I am accessing a memory that hasn’t happened yet? Here is where we need to think extra-dimensionally again. Another link for you, the brilliant and concise run-through of the Ten Dimensions by Rob Bryanton, which every modern magician should be aware of.

We can see the imagined message-in-a-bottle now as travelling back through the Fourth Dimension, to a point where that timeline splits in the Fifth Dimension. We can imagine that, in fact, a praeternatural intelligence or being could exist in the Sixth Dimension, and interact with the lower dimensions at multiple points simultaneously, even though in the lower dimensions it would be experienced at different points along the timeline. You send the message rolling back in its bottle along the timeline, and this entity helps by stopping it just where your former self could pick it up.

It could even scribble a note and stuff it in the bottle as it makes its way along.

Why would this being help you out? Nobody can be sure. For me, I like to believe that the Holy Guardian Angel is the perfected Self, the Pure soul that is all Neshamah, and that its earliest interaction with our lifetime was to put its essence, the Spark of the Logos, into us and create the consciousness from which it is never truly separated.

So we train ourselves to send the memos back to our former selves, and in doing so listen to our future selves. As we train to listen further and further, we start to hear the purer message in the background all the time. Call it Samekh, call it the Abra-Melin, call it Knowledge and Conversation of the HGA – we hear the true call of our Will, and begin to make decisions based on what is truly right. We can even begin to experience their transcendent perspective at each crossroads, where we can look down the paths that are opening before us, and move from precognition to prescience. You could, in theory, start to hop between the timelines in the Fifth Dimension.

That’s where it gets really freaky. You’ll love it.

3 thoughts on “Changing the Past by Listening to the Future”